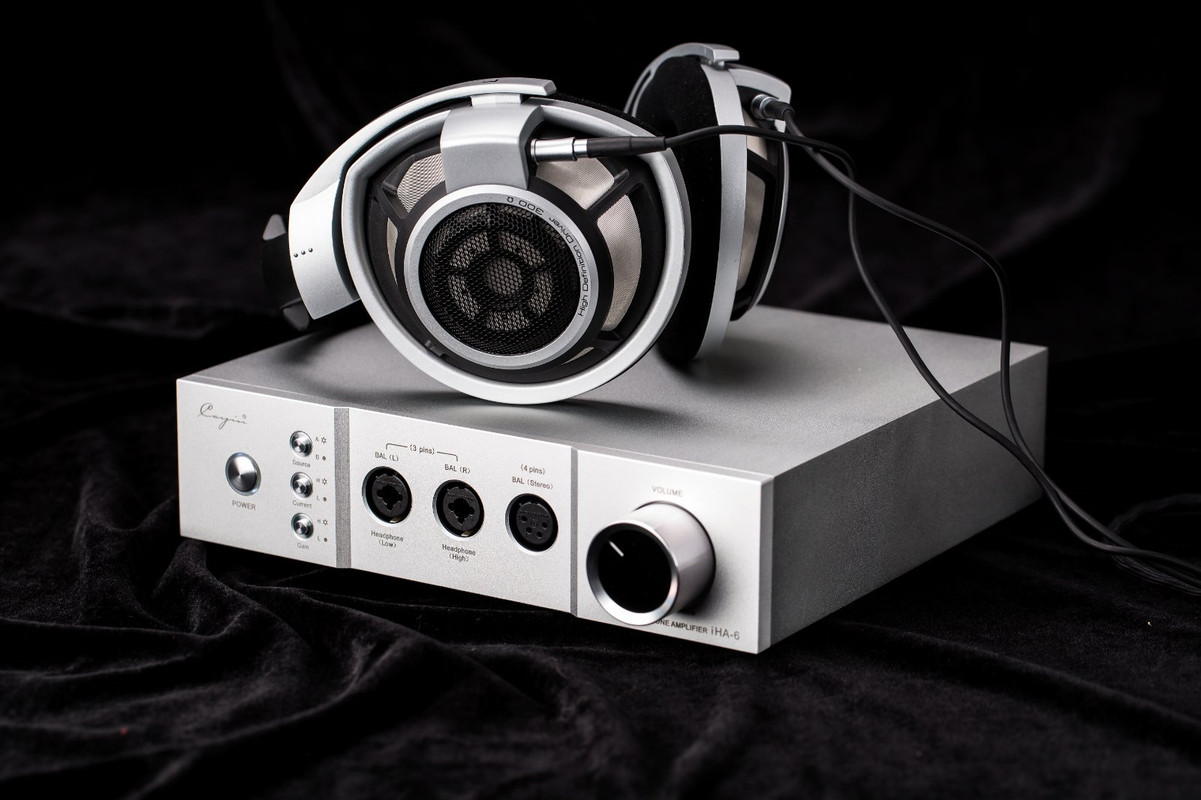 I first became aware of the Cayin brand some years ago as a neophyte to the Head-Fi hobby when a friend bought a C5 portable headphone amplifier.
Driving a pair of Beyerdynamic DT880 250 Ohm headphones, this svelte and well built powerhouse performed brilliantly, to my surprise it must be said.
It was the best of it's kind then, making comparable Fiio offerings seem anemic by comparison, and it remains a contender now.

Fast forward to present day, and Zhuhai Spark Electronic Equipment Company, better known as Cayin for the past 20 years, has rightly earned a serious rep in the community for their
impressive tube amplifiers and DAPs. They do however also make a solid state, fully balanced headphone amplifier, the iHA-6, the subject of this brief review.

I felt compelled to air my impressions, not because Lumous Audio, in their wisdom, decided to loan me a unit for a while to "get my opinion" but because it is the finest
headphone amplifier I've heard south of twenty grand. More amazing is that it retails for a ZAR shy of half that (at the time of writing).
So I've gotten to the punchline upfront: it's a stellar performer, and it did not take long for me to come to this conclusion.

Out of the box one is struck by the solid mass of the thing, only 7 by 24 by 25 centimeters but weighing in at a dense 4 kilograms.
4mm thick aluminum panels are nicely finished in silver with nary a screw in sight.
Upfront one finds no less than 4 different headphone outputs covering low and high impedance 6.35mm and both 3 and 4 pin balanced XLR connectors by Neutrik.
The "low" has an output impedance of 10 Ohm whilst the "high" is 120 Ohm. More on this anon.
The balanced outs both present a load of near as dammit Zero Ohm.

The ability to increase the amp's quiescent current is a very neat trick too. Power is decreased slightly while current delivery is increased.
This works very well indeed on low impedance headphones, and can be very noticeable or not so much, headphone dependent.
A large, onyx fronted silver knob controls the very smooth ALPS RK27 Blue fully balanced 4 way pot.
Since there are no pre-amp functions the rear panel is spartan, housing one pair each of RCA and 3 pin XLR connectors along with the usual IEC power socket.

Switching on one notices that the illuminated power button blinks three times and then settles into a constant white glow.
Protection against DC offset on power up. Nice. My headphones thank you. They don't need to be unplugged, ever.

Having given it 5 minutes to warm up I connect the trusty Sennheiser HD6XX to the  4 pin output on low gain and low current settings.
Source is a Windows PC connected via AQ Pearl USB to Resonessence Concero DAC and thence single ended to the iHA-6, which performs a neat trick with unbalanced inputs.
Although it has fully balanced XLR inputs as well, it converts single ended to balanced internally, and any signal loss via this process is said to be inaudible.

I almost always start listening with the HD6xx (and previously HD650)-since I know its sound so intimately, I can almost immediately hear where an amp is at based on this synergy.
And synergy there certainly was! Santana's IV album in 24/48 FLAC sounded full, detailed and engaging at moderate volume - around 10 on the pot.
Absolutely no need to use high gain, the Cayin outputting a handy 1.2W into 300 Ohms...did I mention this thing is POWERFUL??
Andy Kong, Cayin's marketing guy and very active on Head-Fi and other forums uses both the HiFiMan Susvara and HE-6SE to demo the iHA-6 at shows.
Possibly the 2 most difficult to drive (properly) headphones on the planet, and this in front of a rabid and knowledgeable crowd...either a very brave man or very certain that his amp can do justice to these two behemoths.

Power is the last thing an owner needs to worry about, so let's put that to bed: 7W @ 32 Ohm balanced, 3W @ 120 Ohm and 600mW into 600 Ohm.
According to the Rolls Royce Scale, sufficient. Oh boy, is it ever sufficient..!
I have not needed to use the high gain setting (+12dB) at all, and that should speak volumes.

All that power is delivered with a velvet glove-like delicacy though, refined and smooth when required but capable of huge bursts of dynamic range and slam without any hint of compression or clipping.
I simply loved the way it allowed the HD6xx to sound better than I've ever heard it, and I've heard it from MANY sources.
It is well-known that the venerable Sennheiser scales with better equipment and this absolutely holds true here.

Similarly it gets the best out of all my headphones, from HE400SE to AKG K701 to Fostex TH-X00. Three very different headphones, all of them fully and authoritatively driven.
I heard detail from the HiFiMan I didn't know it could resolve. Bass on the AKG filled out and became...more...and better defined, with seemingly much less roll-off.
The 25 Ohm Fostex is sensitive and easy to drive but the iHA-6 allowed me to experience what it could REALLY do when subjected to massive power, current and control.
This headphone just thrives on current and with the amp in high current mode it's the best I have heard them.
They deliver legendary bass but now it's even better defined and there seems no end to its extension.

I could ramble on, but I've got too much music to listen to...the honeymoon is not yet over.
It is all the headphone amp most (normal) people should ever need and redifines the cost to performance ratio in my book.

Perhaps the only negative about this amp might be the high output impedance of the SE headphone jacks, but truthfully its a non-issue for me.
This amp is designed to deliver as a fully differential device and should be used that way.
In short, it sounds great running SE, but it is exceptional when used balanced. 'Nuff said!

I love switching it on every day and can highly recommend it.

I waiting to get my hands on it as soon as Lumous Audio can get one for me.
As we spoke on email, its going to be a great pair with Arya v2!

Are you going to keep it?

jswanepoel28 said:
Are you going to keep it?
Click to expand...

Based upon my gushing review, what do you think..?

That is, of course, predicated upon the assumption that nothing better (and affordable) comes along!
That could take a while.
Fortunately I got mine at the pre-increase price as well.  :thumbs:

Apparently you don't need to feed them balanced from dac to get a balanced out. Have you done this and can you hear any difference?

I forgot that you specifically mentioned that !! LOL my bad

jswanepoel28 said:
Apparently you don't need to feed them balanced from dac to get a balanced out. Have you done this and can you hear any difference?
Click to expand...

Thus far I have used only single ended DACs so cannot compare.
I would like to buy a balanced DAC one of these days though to complete a fully balanced system.

I can at that stage compare the same DAC using both SE and balanced, but from what I've read, there is VERY little difference.
Of course balanced will give you all the good things that balanced does, but noise, crosstalk and power output are not issues for me using SE.

PS: should anyone have a decent balanced DAC lying around that I can use "for scientific purposes", let me know...

jswanepoel28 said:
Apparently you don't need to feed them balanced from dac to get a balanced out. Have you done this and can you hear any difference?
Click to expand...

Some further info on this from Cayin:

"One of the strengths of the iHA-6 is the bridge-tied load (BTL) circuit that converts single end input to balanced before feeding into the amplification circuit.

This will allow you to enjoy full potential of the iHA-6 with both RCA and XLR inputs.  This is an important feature if you want to use a single-ended output DAC with a fully differential design amplifier."