They butchered it, A/B on YTM.

Why would they do this? It's rubbish.
D

I see no one else is asking so I will (please forgive my ignorance) - what are you saying?

I think he did a comparison?  Not a fan of that album myself so I doubt I would notice much difference

This is a 2021 version of the already remixed and remastered 2019 re-edition...gets confusing!

By returning to some of Richard Wright?s original keyboard parts and by re-recording new drum tracks with Nick Mason, producers David Gilmour and Bob Ezrin sought to the creative balance between the three Pink Floyd members.

This new remix was produced by Gilmour and original album producer Bob Ezrin to create a more organic, timeless sound and to enhance Wright?s ultimately invaluable contribution to an album that, as good as it was, did suffer from a sound too locked in the 1980s.
I have the 24bit 96kHz version, and I must say it sounds very good to me. Thankfully DR has been retained for the most part through the upsampling process.

It sounds warmer than the original which I think in part has to do with the new drums and the overall approach to assembling the recordings.
You can really hear it on songs like ?One Slip? where the snare drum hits now sit in more balanced fashion with the rest of the instruments instead of dominating the mix.However, I can see how someone may not find the additional keys and very different sounding drums in this particular track to their liking initially.
I say give it a few more spins... 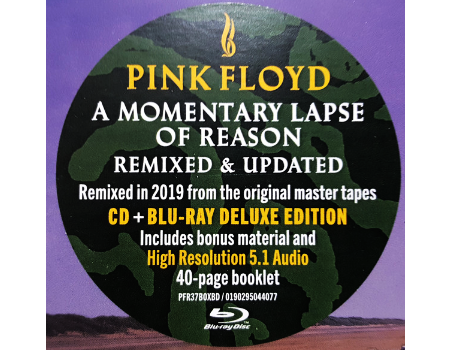 All in all an interesting addition to the latter-day Floyd legacy in my opinion.

That guitar solo on "On The Turning Away" though... :notworthy:

Yes, comparison between the versions.
The levels are changed dramatically between recordings
Percussion sounds stuck behind a blanket now.

I have heard some albums where the remasters sound a fair bit better than the originals, which surprised me.  However, I am not familiar with this album so really can't comment on it.

Not all albums are remastered equally.

One of my favourite albums!!

Zilch said:
I have heard some albums where the remasters sound a fair bit better than the originals, which surprised me.  However, I am not familiar with this album so really can't comment on it.

Not all albums are remastered equally.
Click to expand...

This isn't a remaster of the original, but a completely different mix. It's like two different versions of the same material.

I have both, and really enjoy both. Don't ask me which one I'd take with me to a desert island if I can only pick one.

I've read much hate towards the remix, and to each their own, I guess. After reading many of those views, I was worried that I wasted my money on the remix, but I'm very happy I got it.

For what it's worth, these are the versions I compared, the first being a 2017 remaster and the second the 2021 remix.