We had a request to develop a Mullard 5-10 type stereo amplifier kit in 2018. The result was so good, that we have decided to make it our EL84 kit offering of choice. Since then we have had two orders for kits with red transformer covers. I took some photos before shipping. What do you think of the look? 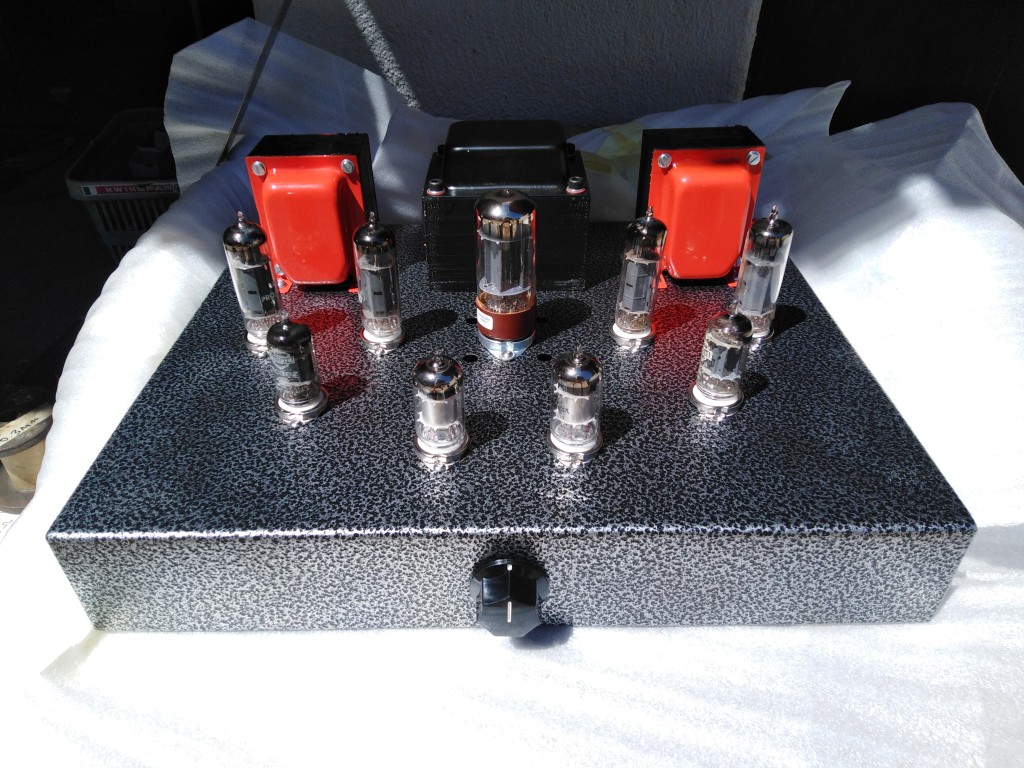 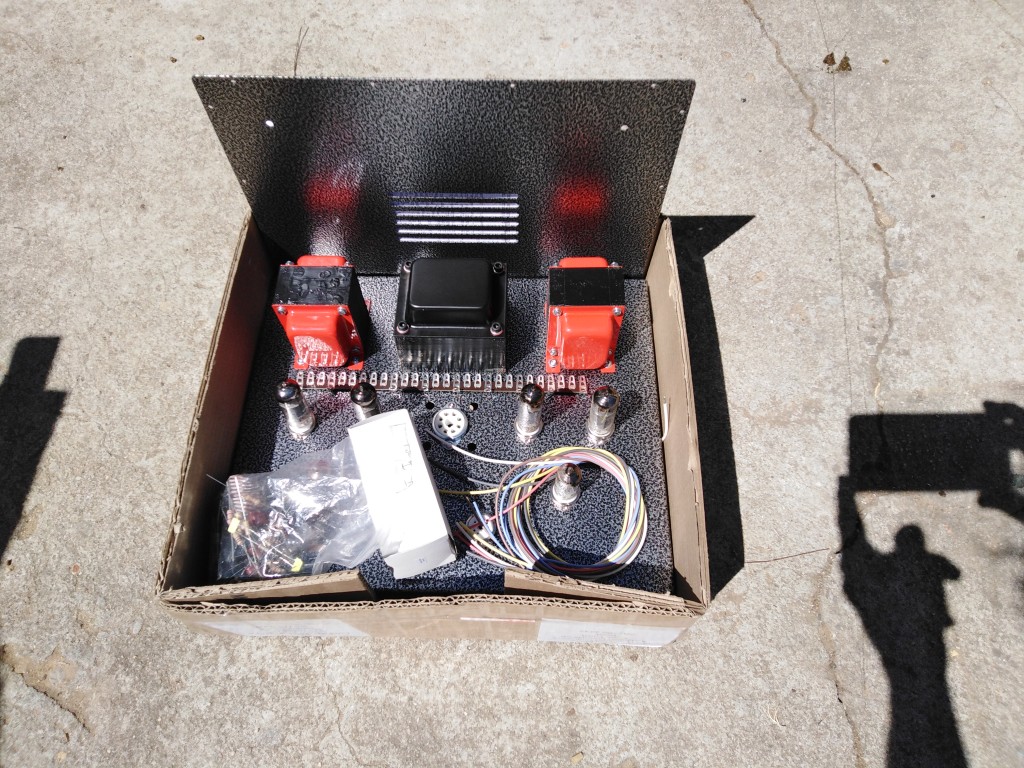 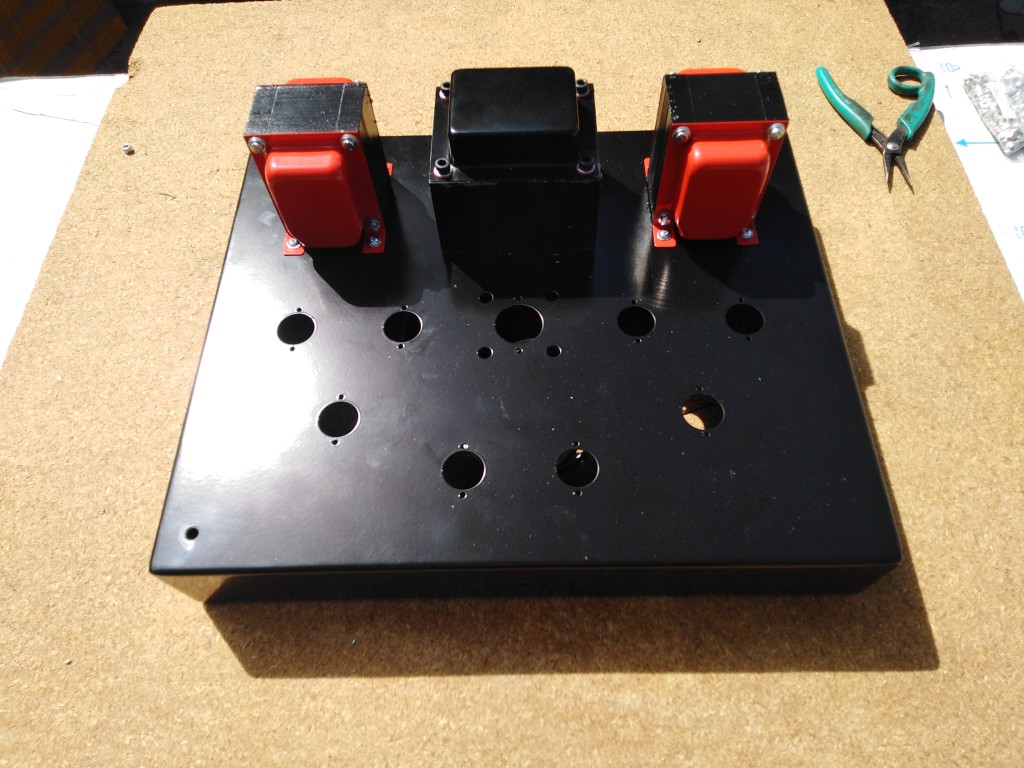 I was wondering .... Are the 5-10's transformers wound with Ultra-Linear taps ? Does the circuit differ from the classic Dynaco 5-10 ? Is there a choke ?

I also think it may be a good idea to encourage Mars builders to "pimp" their amps . It could lead to all kinds of exciting looking gear .

What would a kit like this retail for? I have been meaning to build a diy tube amplifier for some time now and this looks simple enough for a noob like myself.

I was wondering .... Are the 5-10's transformers wound with Ultra-Linear taps ? Does the circuit differ from the classic Dynaco 5-10 ? Is there a choke ?

I also think it may be a good idea to encourage Mars builders to "pimp" their amps . It could lead to all kinds of exciting looking gear .
Click to expand...

Here is the Original 5-10 with the circuit diagram below. It looks like the tone controls have been removed, and the transformers aren't ultralinear. But maybe [member=817]Mars[/member] can tell us how this version differs? Karel do you use the same output transformers as your EL84 PP, or have you wound different ones according to the  Mullard spec?

One difference seems to be a GZ34 (?) rectifier instead of an EZ81

Understandable because is has a bit more oomph
C

Some interesting information regarding the Mullard 5-10 amplifier

I have an original 5-10 Mullard manual (very early edition).

This manual (86 pages) even provides Minimum Specifications for the Output transformer such as:

That hammertone finish is really nice.

No, they are still there; the two pots and associated components just before the volume control, leading into the EF86 g1. (Can't quite read the figures and not sure where my original is). It is a passive tone control configuration, in the days where the signal feed would have been some 500mV, and the pick-up mostly a crystal/ceramic cartridge.

The circuit would benefit from U.L. output transformers; such were not universally available at the time. (25% - 33% taps would be sufficient.) The then higher screen voltage would require some re-biasing, unless the h.t. could be brought down to about 330V. (With a 300Vrms power transformer secondary it might be up to 360V).

Some folks might remember that with this circuit there is the general complaint of being too sensitive, particularly with the tone controls removed.

A Mr Claude Byrith have decreased the gain by using the EF86 triode-connected, which circuit is often referred to.  In my opinion , particularly when building a new amplifier, that choice is second best, though I can see the logic when an initial already exists. But that is another story for another occasion. (I do not recall what Karel's own original looked like; I think it uses a cathodyne phase splitter. There is also merit in that. Perhaps we can discuss all this in PM should he be interested. The original 5-10 can be audibly improved in its behaviour above 2 KHz.)


P.S:  El Sid: Sorry, I may have misunderstood! Did you mean that in the Mars kit the tone controls have been removed, not in the schematic itself that you gave?

Ampdog said:
P.S:  El Sid: Sorry, I may have misunderstood! Did you mean that in the Mars kit the tone controls have been removed, not in the schematic itself that you gave?
Click to expand...

Yes indeed - I?m keen to see how the Mars version differs from the original. The Mars version appears to have no tone control knobs hence my observation

The Mullard 5-10 had various variants, one being with an Ultra-Linear OP Transformer using 20% taps, and the version without tone controls. In this case, the input signal is applied directly to g1 of the EF86 and a 1M Resistor replaces the volume control, also between g1 & ground. I would suggest keeping the volume control rather.

"Distributed Load .
The arrangement of the output stage for operation under conditions of
distributed load is shown in Fig. 2. The screen-grid resistors R20 and
R21 are disconnected from C14 in Fig. 1 and are connected to the
tappings provided on the primary winding of the output transformer.

The centre tap of the primary winding is connected, as before, to the
reservoir capacitor C15. The dropper resistor R22 in the h.t. line no
longer carries the screen-grid current and so is increased from 1.2kΩ
to 5.6kΩ to maintain the same d.c. conditions in the first two stages
of the amplifier.

The best results are obtained with each half of the primary winding
tapped so that about 20 % of the turns are common to the anode and
screen-grid circuits, when the anode-to-anode loading should be
6.6kΩ."

JohnnyIC said:
What would a kit like this retail for? I have been meaning to build a diy tube amplifier for some time now and this looks simple enough for a noob like myself.
Click to expand...

El Sid said:
Yes indeed - I?m keen to see how the Mars version differs from the original. The Mars version appears to have no tone control knobs hence my observation
Click to expand...

Hi El Sid, I have removed the tone controls and reduced the gain by using a ECC82 phase inverter. Currently I am using 47k and 42k anode load resistors on the ECC82.

And have you wound different transformers, or using your standard EL84 PP transofrmers?

I have simulated the Mullard tone controls in Duncan's Tone Stack Calculator. Is the source impedance correct? 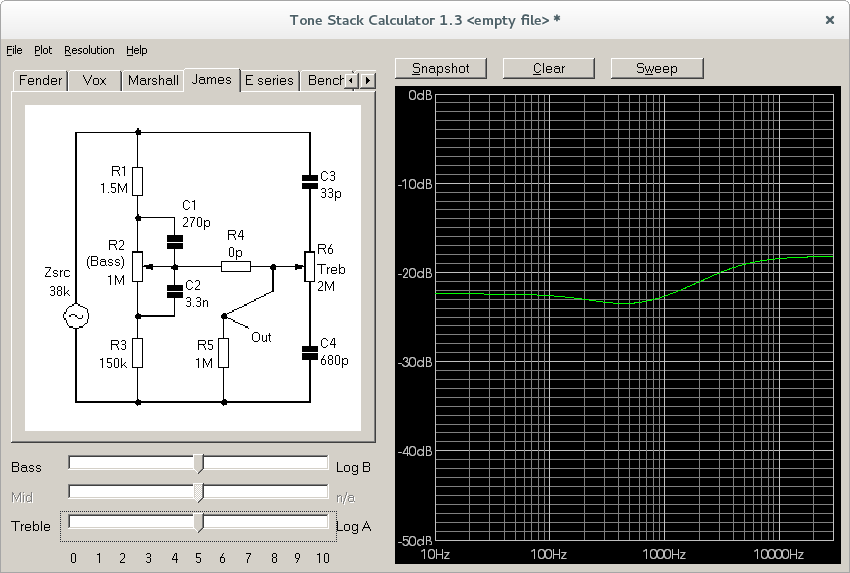 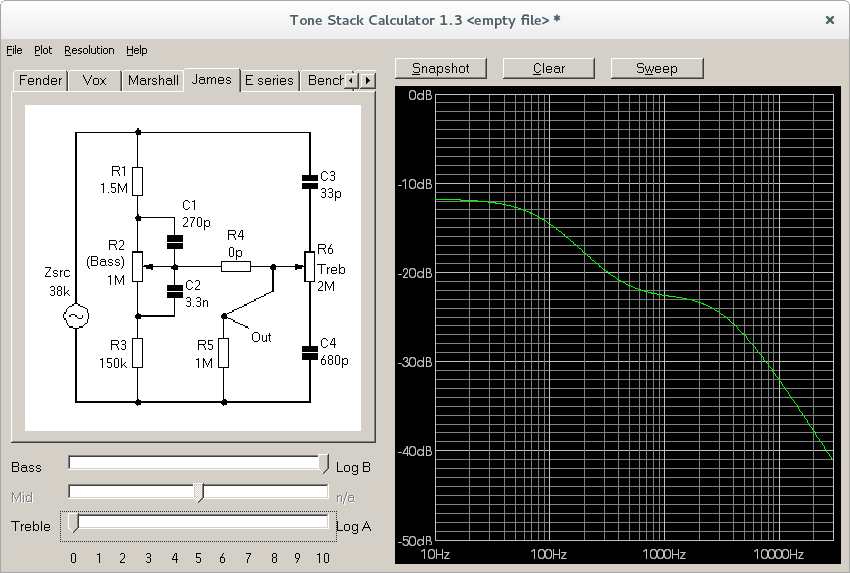 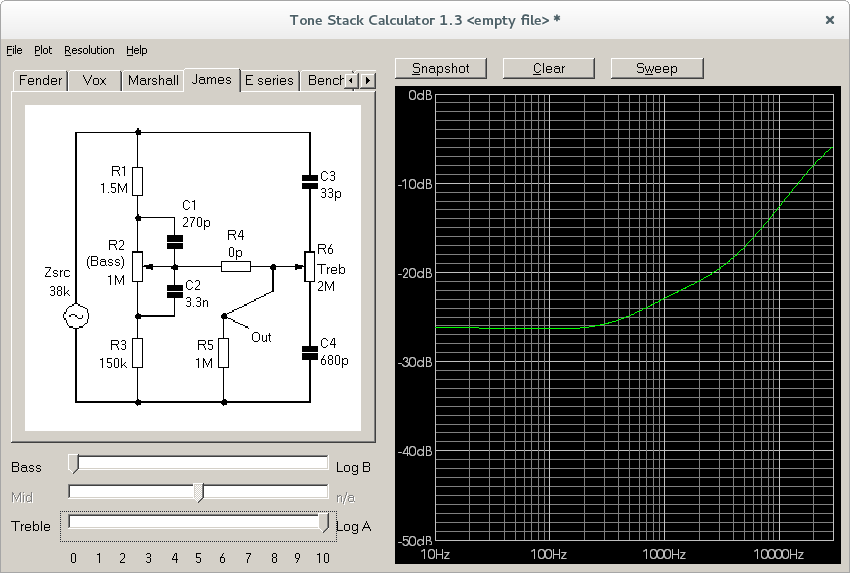 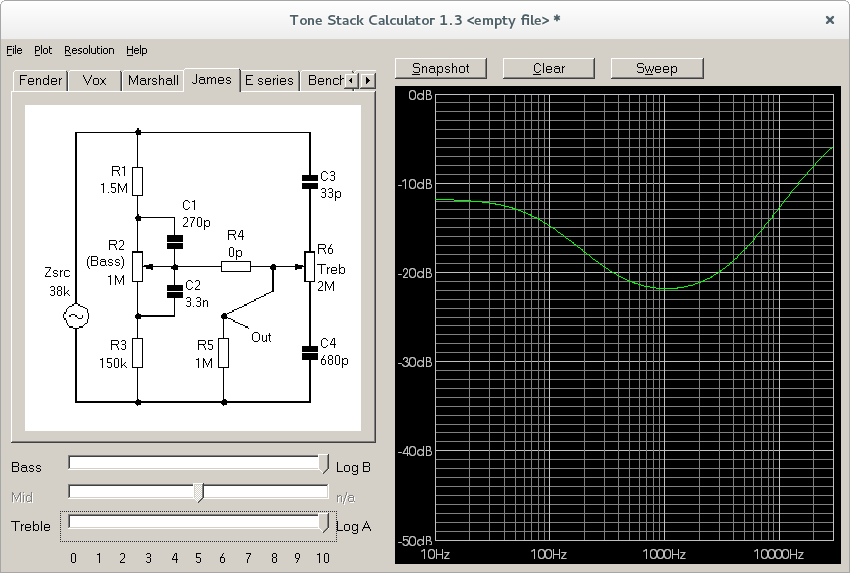 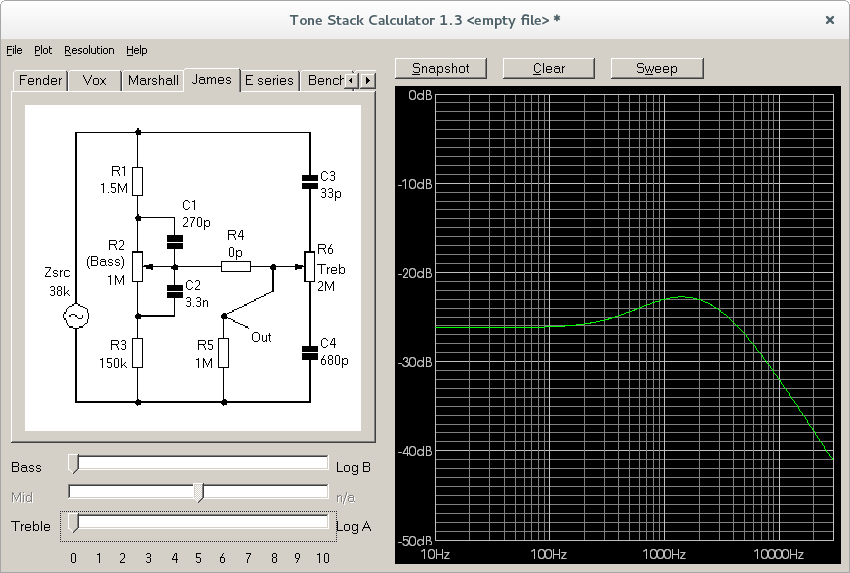 Next question: I suggest we change the treble pot from 2M to 1M. 2M is hard to find. What would the R4, C3 and C4 values be for such a configuration?

In the past I noticed that the 5-10 tone controls are somewhat compromised; not a true log-configuration, as is evident from your analyses. Since the input these days is likely to be from low output impedance devices (not a crystal pick-up as was then), one could decrease the tone stack values say some four-fold to make matters more practical. That would take one to 500K potentiometers plus associated components.

You are one ahead of me right now in that my flippen Spice program will not work. Thus I cannot model for different values, but will calculate with pocket calculator to find new values and contact you later, perhaps by PM so that you can put these through your simulation program first. [E.g. the response with controls set at mid-position should be a straight horizontal line, without the 6 dB deviation found by you. (though it seldom is because of making pots true logarithmic in pactice, plus the even greater difficulty of making ganged log pots to track.  Ah well ....)]

Wow ! Lots of interesting facts . Thank you FD , Ampdog and Karel .
Check pm from me Ampdog .

With passive tone controls the variable resistors would invariably be of the log taper type. A very preliminary estimate of whether the frequency response will be flat in pot middle position, can be made by checking whether he following relationships are true (referring to Karel's circuits on the left of the graphs):

Unfortunately response at frequency extremities can never be mirror images. In the cut positions (control sliders at R3 and C4 ends) the response will flatten out more than at the opposite sides, i.e. 'boost' will be more than 'cut'.

Symmetrical responses are only possible in feedback circuits e.g. the well-known Baxandall circuit. The responses of channels in stereo would also track better. (Ganged linear pots track better than log ones.) Then R5 there is on the low side; it interferes with the symmetrical operation of the bass pot. It should be at least 6 times the pot value.

Said 'proper' operation of tone controls of log fashion is further only so if nothing else is hung onto the circuit internally or if e.g. the load it feeds into is not high enough. (There is no end to the variations found in practice - goodness knows for what purpose or for whose hearing - lame old topic again!). Most such circuits are best fed from a low input impedance, succeeded by a high load impedance.

Just for general knowledge. And should it be necessary to point out again: At flat settings any properly configured tone control circuit has zero amplitude variation and zero phase shift in its pass band.

[Sorry to seem to always play the policeman; not my purpose. But I wish someone would for a welcome change put up and indicate precisely how tone controls affect (usually meant negatively) sound quality instead of lamely perpetuating ancient folly. The electronics are dead simple.] 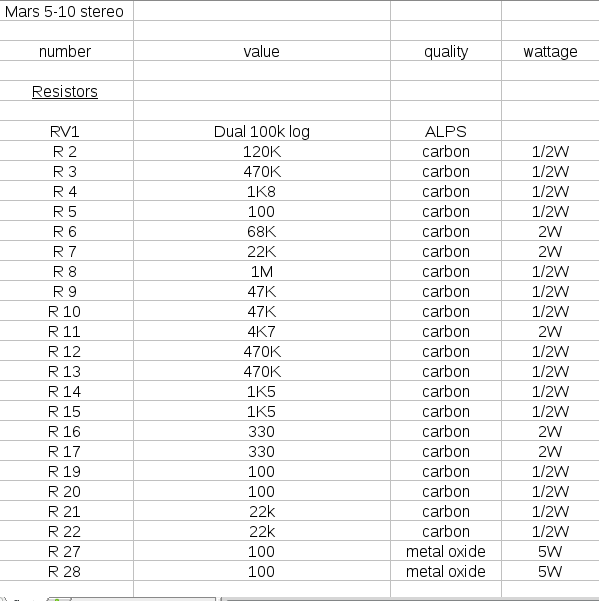 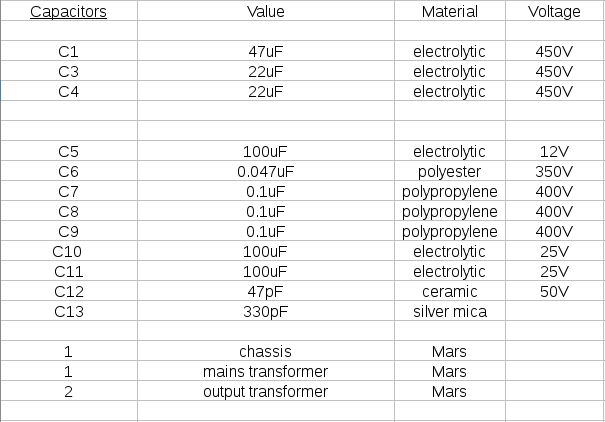 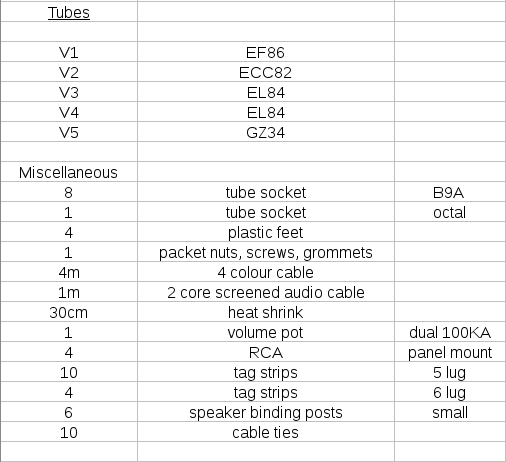 JRiver media player version 29 due to be released soon