He Was a Rising Jazz Pianist. Then His N.Y.C. Dreams Were Shattered.

From the NY Times (posting the full article, not sure if it will be visible behind their paywall).

The police said an attack on the pianist was not a hate crime, but social media disagreed. Now he?s considering a return to Japan.

He came to New York from Tokyo to make it as a jazz musician, and he did, landing gigs in several touring bands and leading a trio of his own. He was elegant but never flashy on the piano, always well prepared and on time. 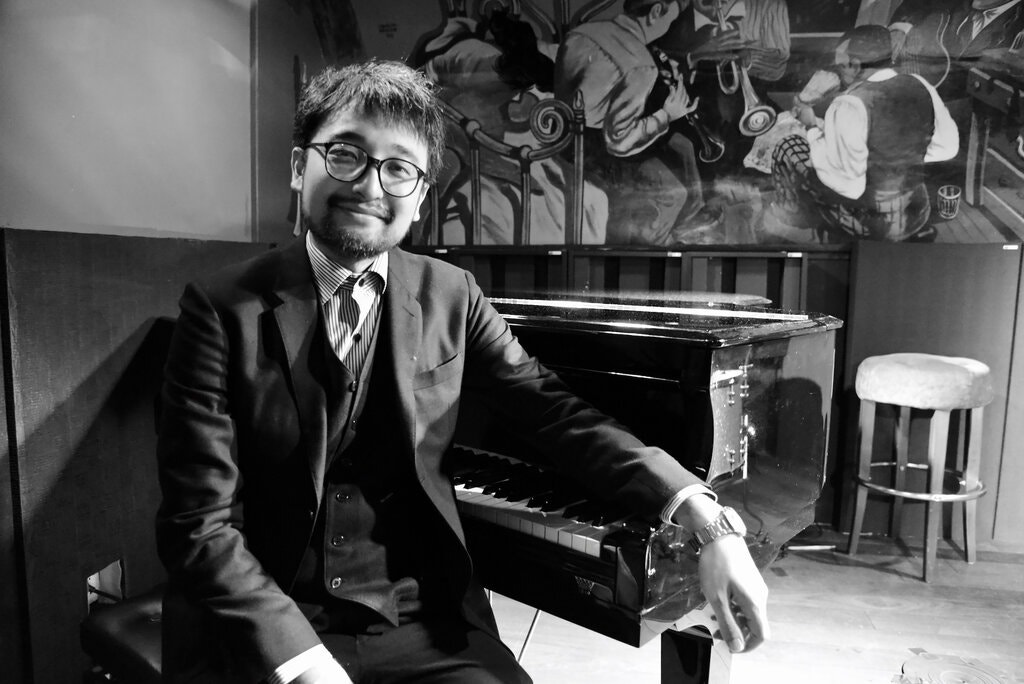 Coming off the subway at West 135th Street after a video shoot, Tadataka Unno, 40, a new father, encountered a group of about eight young people who blocked his way to the turnstiles. When he tried to pass through, one of them shoved him from behind. Another said he had pushed her, and a young man near her said, ?My girl is pregnant.?

That?s when the beating started ? first in the subway station and then up on the street, where he yelled for people to help him, to no avail.

?I thought that this was how I was going to die,? he recalled two weeks later, describing the attack in a written note because it was still painful to talk about it. He did not know how many in the group had hit him. They fractured his right collarbone, injured his arm and bruised him all over. After surgery for the broken bones, he was not sure whether he will ever be able to play the piano again. He has been unable to use his right hand at all, and said he is learning to do everything with his left hand.

The police have made no arrests, though Mr. Unno said the assault was captured on camera in the subway station. He remembered at least one of the attackers calling him ?Asian? and ?Chinese,? along with a profanity.

?I needed to know the culture.?
How quickly does a life change course?

Tadataka Unno was fated to arrive in New York. He started playing jazz piano at age 9, and playing professionally in Japan at 18. The work was steady and gratifying, with recording opportunities and gigs almost every night. But, after a decade, he felt there was something missing, he said in a telephone interview. He could listen to records in Japan, but jazz was more than recordings. ?I needed to know the culture,? he said.

In 2008, when he was 27, his mother cried when he said he was moving to New York, told him not to go. She thought New York was dangerous.

?I wanted to meet my heroes, to play with them, to talk, to hang out,? he said. ?If I stay in Japan it?ll never happen.?

He and his wife, Sayaka, arrived in Harlem on June 19, 2008. Harlem was where jazz history lived. ?I didn?t know anybody,? he said. ?I didn?t have any job. But I didn?t worry about it. I was just happy to be in New York.?

New York breaks those dreams more often than not. But Mr. Unno made them work.

?He?s one of the workman jazz piano players on the New York scene,? said Spike Wilner, a pianist who owns and runs Smalls and Mezzrow, two clubs downtown. ?He works hard, practices hard, but he?s not necessarily high profile. But he?s a tasty pianist, elegant. And a sweetheart of a guy, very gentle. He calls me Spike-san, and I call him Tada-san. Everybody loves him.?

He got work playing with Jimmy Cobb, who played drums on Miles Davis?s album ?Kind of Blue,? which is like being second from the end at Mount Rushmore. This led to a two-year stint with the trumpeter Roy Hargrove, a phenom closer to Mr. Unno?s generation.

?That was a historical moment, because Roy never hired an Asian guy before me,? Mr. Unno said with obvious pride. Mr. Hargrove died of cardiac arrest brought on by kidney disease two years ago, at age 49. Mr. Unno was his last regular pianist. ?He gave me so much love and culture, history,? Mr. Unno said. ?I feel I have a responsibility for what I learned from him. I need to make it my own way, through my music.?

Mr. Unno was always keenly aware of the racial dynamic of jazz, that he was working in a music genre developed by African-Americans, said his friend Jerome Jennings, a drummer and jazz educator who met him back in Japan.

?He was always asking questions to get a better understanding of the culture,? Mr. Jennings said. ?There?s a song lyric, ?You can keep your Dixie/Drop me off in Harlem.? Tada asked me, ?What does Dixie mean?? He was totally open to ingesting the culture and understanding it by any means. He just soaked it up. Living in Harlem was part of that. He understood it was where all those great musicians lived. He knew the importance.?

By 2020, most of what he had envisioned when he left Tokyo for New York had come his way. He had peers, recognition and music. In June he and his wife had their first child, a son.

?He was so happy,? Mr. Wilner said. ?Of course, it puts a lot of pressure on him to keep working, keep things coming in. But he?s very excited.?

The racial epithet
As the attack went on, Mr. Unno said he was saved by a woman who called for an ambulance, which took him to Harlem Hospital Center. He was in shock from the beating and from the unwillingness of bystanders to step in. Nothing like this had ever happened to him before. He could not move his arm, and would have to return for surgery. At home, he said, he felt like his wife had ?two babies to take care of.?

On Oct. 3, Mr. Jennings created a GoFundMe campaign to raise money for medical bills and other expenses. Since the start of the pandemic in March, Mr. Unno, like other musicians, had been unable to earn money by performing. Now his downtime was indefinite, with a baby at home and bills piling up.

The GoFundMe campaign, which made no mention of any racial remarks made by the attackers, surpassed its modest goal of $25,000 on the first day. The money kept coming in, with posts on social media spreading the word and wishing Mr. Unno a full recovery.

Then on Oct. 6, the Japanese news outlet Asahi Shimbun quoted Mr. Unno saying that one of the attackers had used the word ?Chinese? during the attack. Other outlets in Asia and the United States picked up the story, emphasizing the slur. ?Japanese Musician Beaten Up in New York for Being ?Chinese,?? ran the headline in Japan Today. Many noted that crimes against Asian-Americans have risen since the start of the pandemic, which Donald Trump has repeatedly blamed on China.

The tenor of social media posts changed. Now it was a story about racism, about ?white thugs? inspired by Mr. Trump in one post, or, in a Twitter post soon after, about ?racist blacks in Harlem? who ?get away with racial slurs and violence.?

As a window on racial violence rather than a random assault, social media posts spread beyond jazz circles. Grace Meng, a congresswoman representing part of Queens, wrote that ?Hate ? against AAPIs and against any community ? has no place in New York,? using the abbreviation for Asian-Americans and Pacific Islanders. Any uncertainty about the attackers? motives seemed to evaporate.

Mr. Unno received an outpouring of messages from Japanese Americans who recounted their own experiences with racism. He was astonished by their number. As he read the messages, he said, ?My pain was their pain.?

But the motives behind a seemingly senseless crime can be hard to know with certainty.

The police have found no indication that the group attacked Mr. Unno because of his race, and have not classified the attack as a bias crime. Mr. Unno said the attack was a ?blur,? but that he was sure he had heard the slur. There was no evidence that Mr. Trump?s influence had a role in the attack.

An officer from the police department?s Asian Hate Crime Task Force, which formed in August because of the rise in violence, interviewed Mr. Unno but did not consider the attack to be motivated by race.

Mr. Jennings cautioned against calling it a hate crime without more evidence. The attackers, he said, were young people in a time of heightened stress and anger. ?I think some of the papers are spinning a bit,? he said.

Mr. Unno said he still needed ?very strong painkillers? to get through the day. He is unable to play piano or hold his son, and does not know how much function he will regain. Even as he worries about his physical recovery, he fears that recovering from the emotional trauma may be even more difficult. Since the attack he has not left the apartment except for medical treatments because he is afraid. He does not think he could recognize the attackers, because he lost his glasses with the first blows.

Until the attack, he had never experienced racism in New York, he said, and it shook him. He had come to the city to mix with people not like him, and now he was suffering for this difference.

He said he was considering leaving the city that once drew him like the sun, possibly returning to Japan. ?My wife and I worry about raising kids here, especially after this happened,? he said.

The messages from other Asian-Americans talking about their own ordeals, he said, brought home that ?there isn?t a major movement like Black Lives Matter that creates a space for Asians to talk about these issues.?

That needed to change, he said. ?The Asian community is not so tight. Asian people need to stand up and take action.?

John Leland, a Metro reporter, joined The Times in 2000. His most recent book is ?Happiness Is a Choice You Make: Lessons From a Year Among the Oldest Old,? based on a Times series. @johnleland

What to do now?