I love the Art Deco styling on the AVO signal generator - beautiful .... and the industrial look of the transistor analyser  .
C

Eric, on the photo of your AVO transistor tester.

Just below the meter is a plug in unit with 4 screws. This is the power supply unit. Yours look like the battery operated model. Open it and check the condition of the batteries as leaking ones may damage the instrument,

Mine is the mains unit type.

Thanks Charles, I wasn't aware there was a mains operated type. I had already removed the batteries when I first acquired it but just as a matter of ineterest, I opened it up because the unit (of course, AVO style...) makes use of non-standard batteries.

The batteries are held in place by B9A screening cans, quite novel (no pun intended) I thought. Fourteen of them. The batteries themselves I still had, and interestingly, the Eveready X30 made in South Africa nogal, had no signs of any leakage and still measured an off-load voltage of around 1.4v. These batteries must be all of at least 40 years old and still look as good as new. On removing the battery cradle one can still smell that lovely AVO instrument smell it had when still new.

I need to dig up a schematic/servie manual for this unit, see if I can put together a power supply. There are two multipin connectors that plug into the battery cage so I am assuming it is not simply a case of supplying, say, 22v to the battery bank. 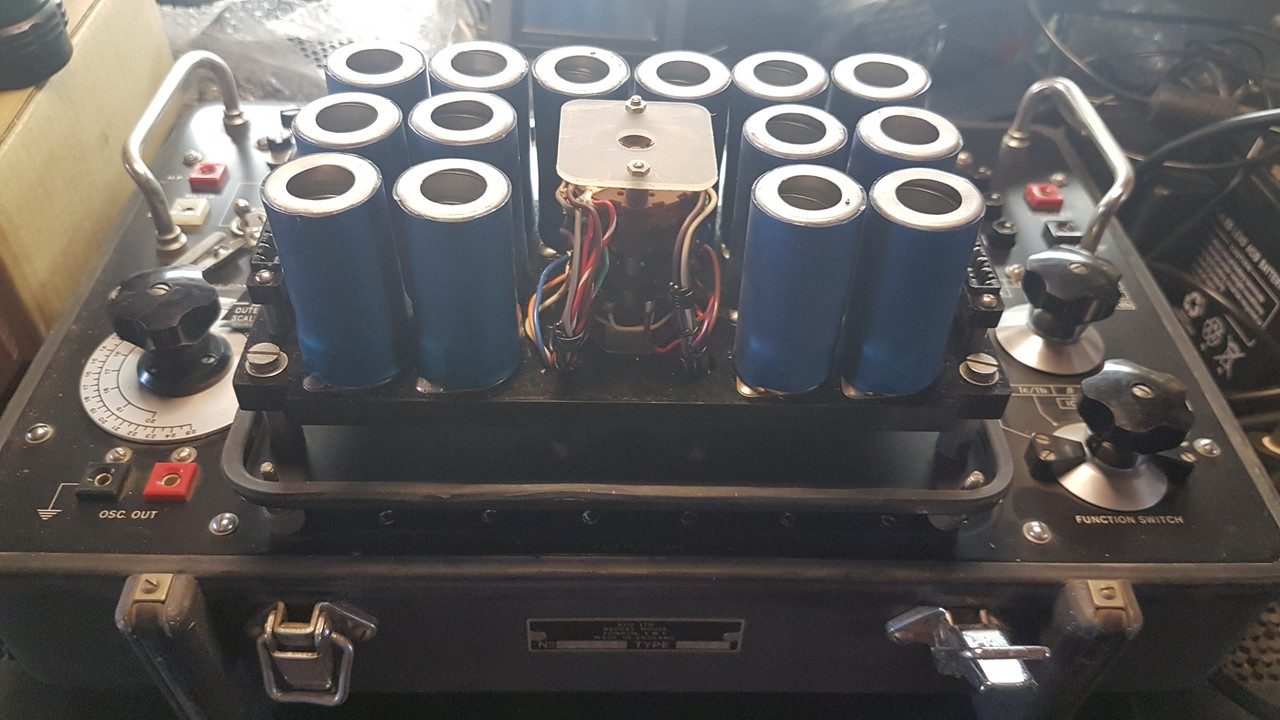 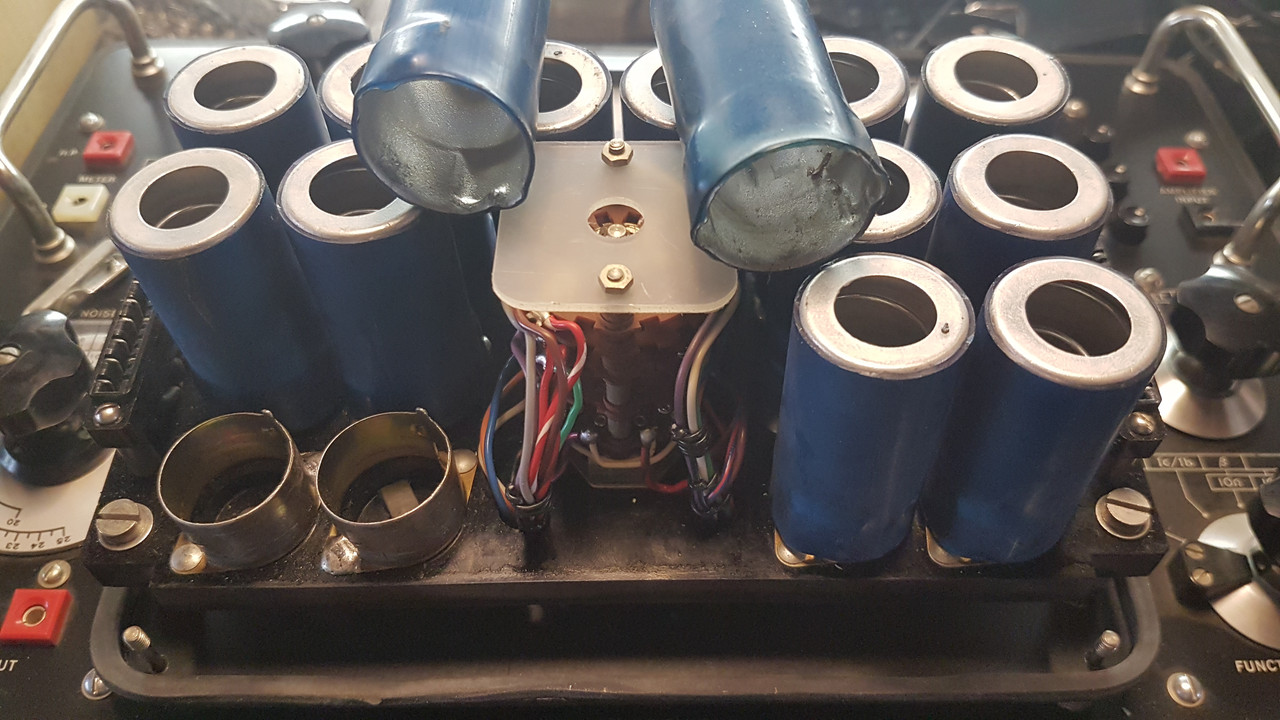 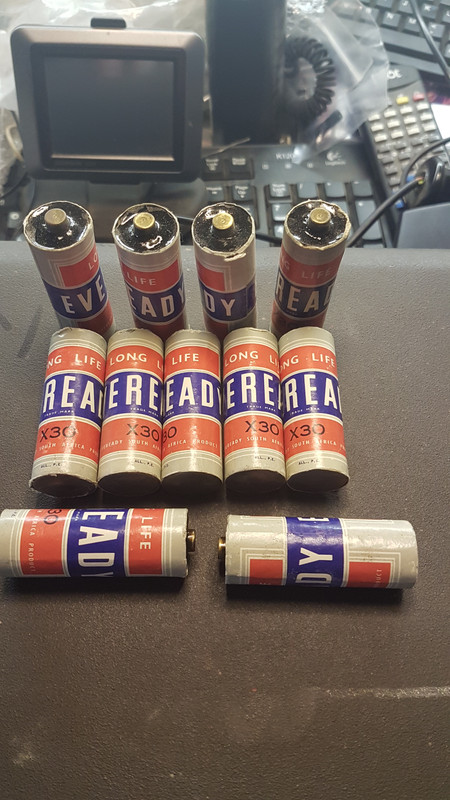 Before certain valves listed in the AVO data manual is a square symbol. When testing the inter-electrode resistance of these valves (hot or cold) these valves may be damaged when using the earlier generation of AVO valve testers.

^^ Good to know this, Charles. I wasn't aware of this at all.

Only the AVO MK I & II valve testers can test certain mercury vapour rectifiers such as the 866A ones and it is listed
in their respective AVO data manuals.
C

Regarding the AVO MK I and MK II valve testers.

Originally there was no protection circuit (diode/capacitor across the meter),as with the 160 model, to protect the moving coil meter. It is important to do this modification.
C

Before certain valves listed in the AVO data manual is a square symbol. When testing the inter-electrode resistance of these valves (hot or cold) these valves may be damaged when using the earlier generation of AVO valve testers.

One of these valves listed is the E88CC
C

There are sometimes incorrect valve settings in some of the AVO data manuals with specific reference to the AVO 163 settings.

I did not refer to the other editions. Please check it.

Faulty setting: One of the triodes will not conduct.

Thank you for the heads-up [member=2759]charles[/member]

I'll correct it in my manual if applicable.

Just a heads up for those that have a AVO valve tester that needs repair and or calibration, Charles introduced me to an expert based in Pretoria, Hans Kapetjin, who is an AVO expert.

He is an ex-CSIR engineer.

Anyway he serviced and calibrated my MK1 and MK2 machines for a very reasonable fee.

Took me some time to find out what this valve really is.

The box:
The box is much bigger than the ordinary box for these type of valves.  The valve is secured in
an innovative method in the box. One one side is a printed indicator, when replacing the valve
in equipment.

The valve:
Beneath its number is a neat acid marking.

This number appears in the AVO valve data manual and its settings is the same as for an ECC 83 valve.

This is not correct:

i came onto this very late; not sure why I did not interest myself earlier, as I have probably tested my fair share of valves in my professional life (does a quantity of many hundreds qualify me?  This ever since I joined the CSIR in February 1960 . . . (We have used several generations of AVO valve testers there.)

One matter that might be of interest (I did not notice it coming up earlier). That is that the AVO's I know of use rectified a.c. (the raw product) for testing. This saves on components (it is one matter to keep such a supply within value over a wide spread of anode current drawn; it is another to do so with a rectified filtered d.c. supply as in normal use.)

The one matter that then needs to be kept in mind, is that the values of current read is r.m.s based and might (probably will!) deviate from what will be obtained under fixed d.c. conditions as listed in valve manuals; this is particularly so with high-Gm power valves.

One therefore has to be careful equate the AVO readings with in-circuit values in the normal steady-state d.c. conditions of valve operation. The main problem is that an AVO-reading will involve an 'averaged' gm-value based on non-linear behaviour as a result of the anode current going from zero to peak value and back 50 times a second.. This will give a different value than when measured under steady-state d.c. operating conditions.

An AVO test is therefore valid with the figures and results published by them, but does not necessarily represent the d.c. powered behaviour involving a fixed Gm value. (If a valve was a perfectly linear device a simple conversion factor would have been possible.)

I am not aware that any later AVO testers used pure d.c.; that would naturally have changed matters. (After the advent of semiconductors such operation would have become possible.)
S

The protection circuit posted by Karstens has been investigated carefully and worthy of consideration.  He uses two Schottky diodes and a cap.  This circuit is for the CT160 but I suspect it will work on older Avos too.

Schottky diodes are not required.  4007's work well enough and yield protection which is safely out of the meter's full scale range.

Hmmm..  these testers are still widely discussed.    Just a pity that they are rather limited in one very important respect, especially for power amplifier users : they do not indicate control grid leakage current.  Sometimes you can observe unstable anode current as a result, but not always.

The audio tube user can rather build a dedicated quick and cheap tester, with only the socket and measuring range required.  And indication of grid leak - very important!

Valves in series vs in parallel
2 3

A significant read if you into tubes